Please give us a brief synopsis of the process of creating this piece of work?
OK... this particular piece consists of three different components. Two of these - the bricks and the wood - were salvaged from the Olympic Park more than twelve months ago which is a good indication of just how long I had been thinking about and planning this project. At that time I was constantly on the lookout for things that I could potentially use although at that time I was still not sure that the project would ever see the light of day. So to be writing about this now as a completed work is a really good feeling.

The first stage was to get my bricks in a row...

It was very important to get the symmetry and scale of this work right from the outset so that the precision work that followed always had the right alignment.

The next stage was to insert the salvaged wood into the brick and put in some serious work to transform the rough wood to the extent that it becomes almost unrecognisable. I then attached the whole construct to a a base which had been sized to harmonise with the shape and scale of the brick and the wood:

Once I had the scale I started to work on the surrounding textures and colours:

One other thing that I would like to say about this particular piece is that the brick is really quite special. It is 'London Brick' which has a long history. The London Brick Company was founded in 1889 and has essentially built London since then and it continues to do so. The bricks I use in this work were left over from the Olympic Park and much of the brick based construction in the Olympic Park and the Lea Valley Park as well, were manufactured by the London Brick Company.

What about the wood?
The wood has come from wooden pallets that could be seen everywhere during the construction as they are the bases upon which everything is delivered. So the pallets would have had bricks  or other building materials sacked on them. So I think this particular work really is a linear distillation of the materials and processes of construction. 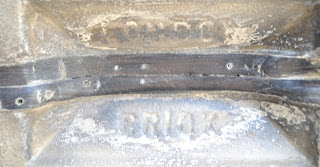