Walthamstow based artist Jonathan O’Dea opened his new exhibition this weekend at the Waterworks in the Lee Valley Park. I’ve known Jonathan for a few years now and we’ve spent the odd evening in the Rose and Crown talking, I am sure very wisely, about art and music, amongst other things. One subject we both keep returning to is Waltham Forest’s position on the edge of the city – and the way that this perhaps denies this part of London the identity and attitude of its East London neighbours, or the home counties security of adjoining Essex.

The first exhibition I saw of Jonathan’s work seemed to me to directly reflect these themes – a series of abstract landscapes on whose horizons shimmered objects which may have been trees, or could have been industrial buildings. Perhaps these were echoes of this part of the East End’s memories – of the factories and warehouses which were cleared from the Lee Valley when work began on the Olympic Park, or maybe they were natural features which have been covered up by the urban sprawl – future echoes from the utopian world of William Morris’s News from Nowhere.


When I visited Jonathan in his studio a few weeks ago those landscape canvasses were stacked in racks in the corner – and he has clearly compartmentalised that work mentally as well as physically. The pieces he was working on for this exhibition are strikingly different. Jonathan has had free reign to remove junk and waste from the Lee Valley park and has produced a series of pieces using materials he has found there, or reclaimed from disused rooms in warehouses. Wooden pallets have been transformed into organic looking structures, bricks neatly mounted, painted, and then partially annihilated. Wooden materials are made to look metallic and old disused pipe work is newly painted. 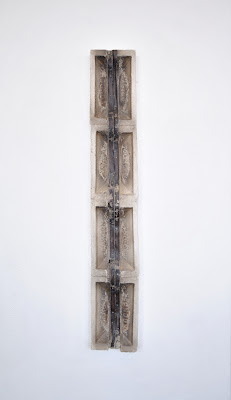 The most ambitious piece in the show will be a large site specific sculpture in which a slowly decaying tree is encased in a wire mesh. 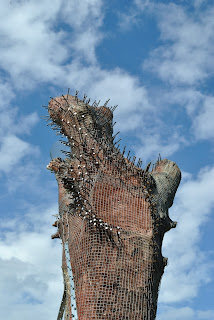 As this piece rises at the edge of the glistening Olympic park and those transformed pieces of rubbish are mounted as artworks near to where they were once abandoned, this show promises to encourage viewers to reflect on the way we change and transform the landscapes around us, to imagine how the ground beneath our feet was once different, and wonder how future generations will transform the places we know so well.